Tile Hill Village runs from Banner Lane, through Station Avenue, to Cromwell Lane, and on towards Burton Green. Banner Lane is so named after the military banners flown near to Broad Lane, by Oliver Cromwell's assembling Roundhead troops, during the English Civil War. The Roundheads then marched down what was a cart track, from Broad Lane, along Banner Lane, through Tile Hill Village, and up what was later named Cromwell Lane, towards Kenilworth Castle, where Roundheads encountered a fierce battle with Royalists. The place "ran red with blood" ... which could reflect the naming of Red Lane, though the 'red' may have already been in use, named after the red clay soil and red sandstone found abundantly nearby.

The junction of Cromwell Lane, Red Lane and Hob Lane was a resting point on the old Drove Road that led from Wales to London, so Tile Hill Village and Burton Green grew as hospitality points for feeding and resting drovers. After which, catching the cattle to continue the journey led to the nearby placename, 'Catchems Corner'.

Tile Hill was also an overnight resting point for the Royal Train, when kings and queens visited the area. Nearby secluded sidings were guarded by policemen, and members of the royal household would be seen walking and collecting flowers in nearby fields.

There were always several shops in Tile Hill Village. Opposite Tanyards Farm on the corner of Station Avenue was a house where the HILLs sold provisions in their front room. Nearby was the Butcher's. Opposite that on the corner of Tile Hill Lane was the Village Stores and Garage. Just along Tile Hill Lane was a small row of modern Shops. Half-way along Station Avenue, just past the Bell Inn, was another row of Shops, a Draper's, a Newsagents, and a Barber. Opposite those shops was Westwood Vicarage and the Church Hall. [Tile Hill Kid - William Hartley - william@tilehillkid.uk]

A WALK THROUGH 19thC TILE HILL ... Arriving by train at Tile Hill Station from Coventry, firstly we cross the line to our right, then follow Station Avenue downhill into Tile Hill Village, passing Duggins Lane to the left. We pass "Westwood Vicarage" to our right and the "Bell Inn" on our left, then cross over Tile Hill Lane junction into Banner Lane ["Tanyard Farm" is on the left]. A gradual rise takes us to a farmhouse at the top of the hill to the left ["Connoway Farm"], then falls and crosses a little stream. Up another gentle incline for about a hundred and twenty paces, we arrive at a gate leading into "Tile Hill Wood" on the right [now a Nature Reserve].
A footpath leads through the wood - taking this, we begin a cross-country tramp. Of course, we are warned by a prominent notice affixed to the first high tree that we come to that "all persons found trespassing in this wood will be prosecuted - BY ORDER !" but we must interpret this in a liberal spirit and not go after game. Presently another footpath branches off from ours to the left, but we keep straight on. For different persons a wood has different attractions, but chief among these is the calm restfulness that pervades the whole surroundings, and we cannot help lingering to enjoy this feeling, especially when we come to a small pond which has sloping mossy banks. We startle a squirrel, which darts across our path and up a tree. The footpath is not of the best, but it is cool, being flanked on one side by a rippling streamlet. The wood has been newly planted in places with young trees, while the decayed stumps of the old ones attest the fact the wood itself is not new. From the wood we enter a green lane which skirts the wood at right angles to the path we have been traversing, and we turn to our left, eventually reaching Broad Lane, the main road leading from Coventry to Berkswell, at a point beside the "Hawthorn Tree". We turn to our right, but instead of walking straight back to Coventry along Broad Lane, we climb over a stile on the opposite side of the lane a few paces further on and make for "Eastern Green". 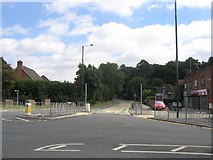 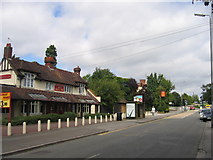 Station Avenue looking up towards The Bell inn on the left and carrying on into banner lane.

Located on the corner was Viners garage where petrol and car repairs were carried out along with a limited amount of car spare parts.

Being spoilt for choice there was another grocery shop called Nellie Smith’s in Station Ave.
They supplied hardware as well as groceries with the hardware stored and sold from a wooden garage type addition at the front of the store (this was turned into a café at a later date) and a small shed housing the potatoes and tinned fruits etc.

The terraced house connected to Bates the butchers at the top and opposite the garage was owned by the Wise family (Father, Mother and son). Then Bates the Butchers shop that is still being worked as a more versatile butchers shop and the third privately owned but was a solicitor’s office the name of which I think was Abbots but not sure.

Further down Station Avenue was one building containing 3 shops Mr & Mrs Chick’s the paper and sweet shop, the wool / dress shop owned by Mrs Tye and the wine lodge. I had the pleasure of delivering papers for her going to Station Ave, Conway Ave, Nailcotte Ave, Duggins lane (round the 2 mile block) and Tanners lane all before school and for a pittance compared to today’s rates.
The local meeting place for the adults was the Bell Inn where many fishing stories were told and women caught up with gossip. There was a bowling green to the rear of the pub that my granddad and uncle kept in pristine condition for the more serious minded sportsmen. Beer drinking was taken just as serious as it is today with the big drinkers waddling there way home for Sunday dinner and the remainder stretching out the conversation after pub closure.

Ran by = Mr and Mrs Bull then Mr & Mrs Taylor and Daughter Justine
among others I have yet to recall.

The village boasted it’s own village hall and vicarage where the vicar put on garden fete’s in his garden on celebratory occasions to make funds for good causes. These were brilliant occasions where the village people and surrounding farmers etc would all meet and pull together to make it a grand day out for all. It also acted a way of bringing the congregation together – something lacking in today’s society.
He and the congregation did bowling for the pig, skittles, and various fairground types of stalls.
I personally enjoyed these functions immensely as everyone always seemed to enjoy and have fun together.

Tile Hill Vicarage
This is where the garden fetes were held for all around. I remember the wooden bowl and skittles, although there were many other functions going on. Right behind the building is Tile Hill woods where we spent most of our after school time as we could hear our Mothers calling us for tea. I don’t recall a great deal about the vicar in fact the only mindful event was when I rang the Sunday school bell because he was late for classes. When he did arrive and ask “Who rang the bell” my “friends” all stood up pointing to me. It was them that had dared me to ring it to hurry him up.

The village hall played its part as well having a Sunday school for us kids, women’s meetings, wedding receptions and various other functions. We were called to church with the tolling of the Bell every Sunday morning and afternoon. The one function that comes to mind was the time we approached the Vicar to use the hall for a disco ran by us. We had an electrical record player (nothing fancy) and we purchased non alcoholic drinks from Mrs Chick’s at a reduced price with her taking back what we couldn’t sell along with the empties at a penny each. The Vicar also demanded a portion of the takings leaving Derek, Bill and myself with a little profit. It was quite popular with the local youth, good fun and was trouble free because they knew if trouble erupted the Vicar would withdraw his permission. Along both sides of the hall were well-tended garden allotments, one plot being rented by my Uncle Clarence and my stepfather. I also played a minor part clearing weeds and fetching and carrying tea and sandwiches. The field to the side and rear was I assumed rented to George Duggins for his horses, as there were always horses in the field. Opposite we had what we called Fishers banks, as it was on the now Torrington Ave called because the Standard Triumph body works were on the other side of the road. Two bodies at a time were transported from B’ham to here for dipping and spraying on a 24-hour shift system before going on to Standards Fletchamstead works. They actually caused quite a nuisance because when they were passing the residential part of Nailcotte and Conway Ave. all night and day – the rattle from the empty body shells would wake the devil.