[Photo:L&GRP] There has been a Railway through Tile Hill since 1838. The original Tile Hill Station was named 'Allesley Lane Station' opened in 1850. In those days one of the people living in the immediate area was Ann WAKEFIELD [see "Wakefield Cottages/Wakefield Crossing"]. In 1857 the station was renamed 'Allesley Gate'. - the gate was made to protect the Allesley to Kenilworth Lane [now Station Avenue/Cromwell Lane] On the right in the photo is a fenced cattle transport/goods area, together with a siding [Coventry-Birmingham up line]. The goods yard was a single line siding with a cattle dock at one end and a weighbridge to cater for mineral goods traffic. The date of opening is not known but the goods yard was closed on 4th February 1963.
On the left, the tall building is the Crossing Keepers cottage. The smaller building in front is the booking/ticket office [Birmingham-Coventry down line].

[Photo:CoventryLocalStudies] Finally in 1864, it was renamed "Tile Hill Station". This is a view down Cromwell Lane towards Tile Hill Village, with the Crossing Keepers cottage on the right. The early railway staff were William MOSS and William SAWKINS and the fare from Coventry to Tile Hill was 3.5d [=1.5p] Trains running at that time were five 'up' and seven 'down', daily.

[Photo:JHyde] This view is up-line from the goods yard. It shows the down-line buildings and platform. Near the goods yard, George SPARROW was manager of Lord LEIGH's 'Westwood Brick Works' [the Brick Works produced bricks, tiles and drain pipes]. The LEIGHs were once one of the largest landowners in Warwickshire and owned Stoneleigh Abbey and the surrounding countryside - lands covering over 2,200 acres were purchased in 1926 by Coventry, including much of Tile Hill.   One of Lord LEIGH's family was a regular visitor to the [now disused] "Smithy" in Duggins Lane [shown on the maps below].

[Photo:CoventryLocalStudies] The original tall signal box had a commanding view of the station and beyond.

[Photo:unknown] In the 1960's the original station was completely demolished due to electrification of the line. A new, smaller signal box was built diagonally opposite, on the site of the goods yard. This photo was taken just before the old signal box was demolished, the new box in the background.

[Photo:JHyde] the new signal box, weathered after a few years.

[Photo:TileHillKid] These trains necessitated closure of the crossing 175 times each day. This equated to 39 minutes in the lunch time peak hour between 1 pm and 2 pm, which caused both traffic and pedestrian queues whilst people waited to cross. Railtrack upgraded the West Coast Main Line with the introduction of newer and faster trains, and more frequent services from London to the Midlands, North West of England and Scotland. The improved frequency of trains increased the barrier down times to the extent that the operation of the level crossing at Tile Hill was no longer viable. construction of the new road bridge under way; the old level crossing days are numbered. Into the 21stC and the level crossing was finally closed forever. A new road bridge provided to the east of the existing road, allowing safe and clear passage over the railway.

[Photo:unknown] The road bridge is constructed from pre-stressed concrete beams and earth ramps with vertical retaining walls, and footways to both sides. New access roads are provided to serve the small number of nearby premises, including the Sports Centre for the Disabled. There is also be a new direct footpath link under the new bridge between Tile Hill Station and the existing car park. A new pedestrian footbridge is provided at Tile Hill Station for railway passengers. This provides more convenient access to the station and avoid the need to use the road bridge. 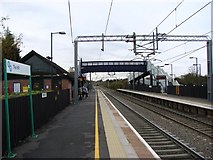 running at 225mph ... from the South, the main HS2 track runs west of Southam, then between Coventry and Leamington Spa, heading towards the New Solihull Interchange, just east of the NEC

the New Solihull Interchange, east of the NEC and Birmingham Airport. A terminal line then runs on into a New Curzon Street Station in Birmingham. The main HS2 line continues to head Northwards, branching East and West, to the south of Tamworth.

A WALK THROUGH 19thC TILE HILL ... Arriving by train at Tile Hill Station from Coventry, firstly we cross the line to our right, then follow Station Avenue downhill into Tile Hill Village, passing Duggins Lane to the left. We pass "Westwood Vicarage" to our right and the "Bell Inn" on our left, then cross over Tile Hill Lane junction into Banner Lane. A gradual rise takes us to a farmhouse at the top of the hill to the left, then falls and crosses a little stream. Up another gentle incline for about a hundred and twenty paces, we arrive at a gate leading into "Tile Hill Wood" on the right. A footpath leads through the wood - taking this, we begin a cross-country tramp. Of course, we are warned by a prominent notice affixed to the first high tree that we come to that "all persons found trespassing in this wood will be prosecuted - BY ORDER !" but we must interpret this in a liberal spirit and not go after game. Presently another footpath branches off from ours to the left, but we keep straight on. For different persons a wood has different attractions, but chief among these is the calm restfulness that pervades the whole surroundings, and we cannot help lingering to enjoy this feeling, especially when we come to a small pond which has sloping mossy banks. We startle a squirrel, which darts across our path and up a tree. The footpath is not of the best, but it is cool, being flanked on one side by a rippling streamlet. The wood has been newly planted in places with young trees, while the decayed stumps of the old ones attest the fact the wood itself is not new. From the wood we enter a green lane which skirts the wood at right angles to the path we have been traversing, and we turn to our left, eventually reaching Broad Lane, the main road leading from Coventry to Berkswell, at a point beside the "Hawthorn Tree". We turn to our right, but instead of walking straight back to Coventry along Broad Lane, we climb over a stile on the opposite side of the lane a few paces further on and make for "Eastern Green".